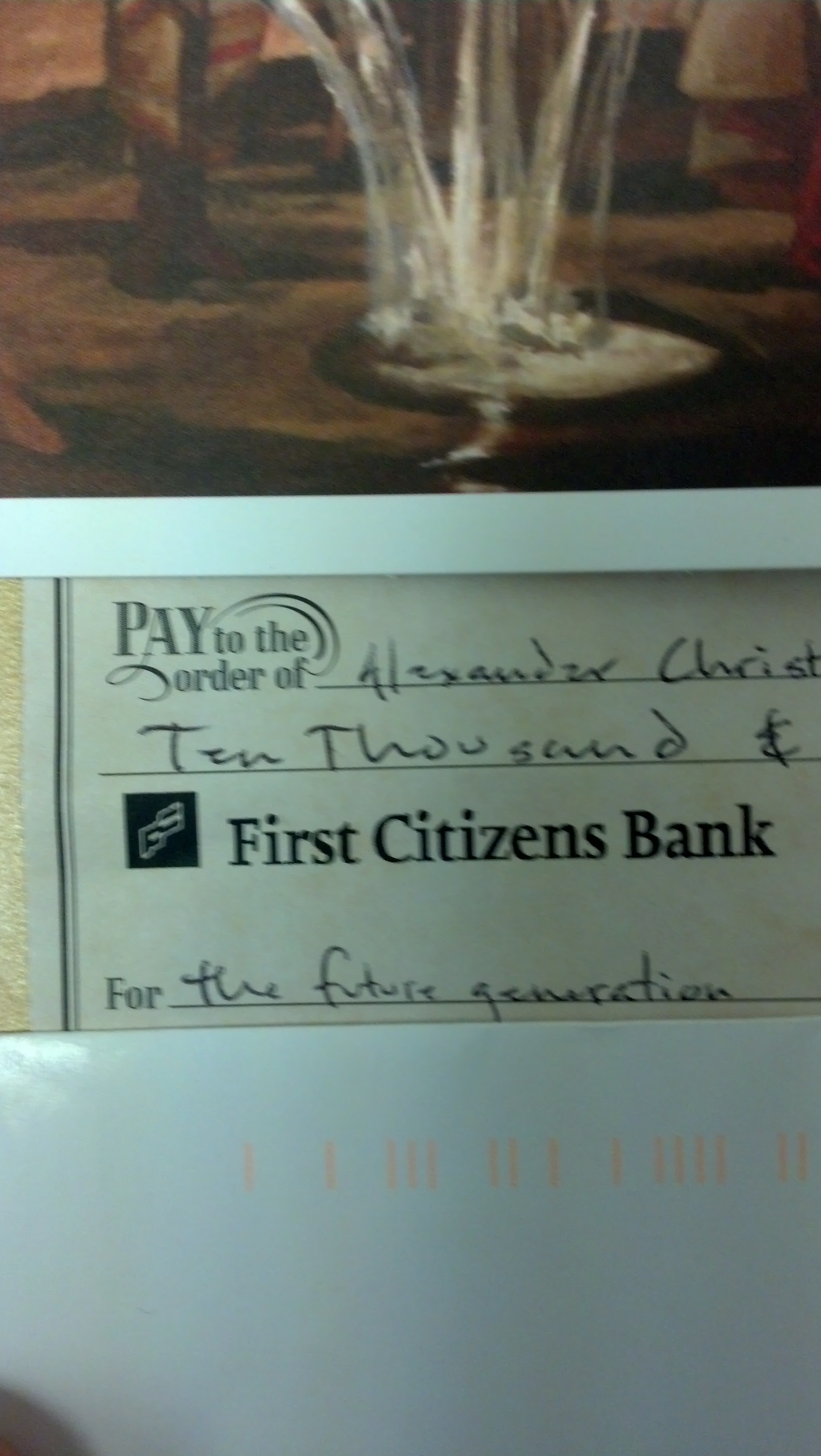 I am overwhelmed with the goodness and the faithfulness of God as He continues to provide for His school in His way.  When God first began to stir our hearts about opening a Christian school, Greg and I both knew that the Lord was leading us to do it His way.  The Lord led us to read more about George Muller and how he was led to start an orphanage in the 1800s by not asking anyone for anything, and by completely trusting in the Living God and depending only on Him.  He desired “to show by visible proof that God is unchangingly the same.  He was determined to take God at His word and to rely upon it that God might be magnified and seen, to show that He is faithful still, and that all is provided for by prayer- not asking anyone for anything.  Everything was only obtained by prayer and faith” as stated in his book, Answers to Prayer from George Muller’s Narratives.

Last Thursday evening I felt as if the Lord was speaking to my heart and saying “Open wide thy mouth.”  As I spent time in His presence and speaking with Him, I felt led to read out of my George Muller book.  I turned on my Kindle and touched the button to open up the book.  The book opened and the screen revealed the words, “Open Wide Thy Mouth” in bold print as a subheading on the page that I just happened to have stopped reading on several months ago.  I immediately began to read about how the Lord had prompted Mr. Muller to be specific in his prayers as he asked for the needs for the orphanage and for the children that would fill it.  I knew instantly that I needed to begin praying aloud specifically for the needs of God’s school here at Alexander Christian Academy, His staff, and His students.  I asked God to give me wisdom and direction in my asking and that He would meet our needs according to His perfect plan in His perfect way.  Friday midmorning I shared my thoughts with Mrs. Kathy and told her about what I had read.  I gave her the book and she began to read about how God had heard and answered every specific prayer that George Muller had prayed in miraculous and supernatural ways.  Later that day we enrolled 4 new students increasing all of our class sizes.  I was standing in the hall talking with Mrs. Kathy and said, “I guess we need more laptops now because there won’t be enough for everyone to have one to use at the same time.”  She reminded me to “Open wide my mouth” and to ask God specifically for what we needed.  We asked for His provision of laptops as well as finances.  Mrs. Kathy said that the specific amount of $10,000 kept running through her mind.  It was a simple prayer that literally went something like, “God, we need more laptops and more money for Your school.”  The most wonderful thing is that God hears our prayers- every single one of them, and He knows our thoughts before we even ask.  He knows what we need more than we know what we need, and He desires to meet our needs in His ways.

I left school for the weekend knowing that God would meet our needs whenever He wanted and however He wanted, and we thanked Him in advance for His provision.  I went to a 5th quarter event later that evening, and the first person that I talked to said, “I have been trying to get in touch with you this week.  Do you need any laptops for the school?”  I had a huge smile on my face as I told him about the conversation and the short prayer that we had just had that afternoon in the hallway at school. It was an incredible, tangible reminder of the goodness and the faithfulness of God.  I shared the story with our staff and with about anyone else that would listen and we celebrated what God had done without us asking anyone for anything.

The most amazing part is that we had no idea that God was about to release even more of His provision for His school.  Yesterday afternoon our staff members sorted, counted, and inventoried over $7,400 worth of donations, and that is only the part that Greg could fit in his car.  We have 2 pallets full of the same types of items that we still need to pick up when we can go back with a van or a truck.  We also had educational games, math manipulatives, and school supplies donated yesterday and today that will greatly benefit the children of ACA in so many ways.

The most unexpected and overwhelming display of God’s faithfulness and His provision came this morning in a simple card that I opened after our morning worship time and after our school day had already started.  Mrs. Kathy had brought me the mail to look through and on the top of the small stack, there was a card addressed to Greg and me.  I decided to open it first while my students were finishing their journal writing and to save all the “junk mail” for later. I opened the card and noticed a folded check inside but paid very little attention to it as I read the card that it had come in.  It was from a dear couple from C3Greensboro and the note was so sweet.  It was such a timely and refreshing reminder of our precious friends that are praying for us and supporting us as we have stepped at God’s leading to open His school.  I smiled as I read the note and almost forgot to even look at the check.  When I unfolded the check I found myself having to look at it 3 times to make sure that I read the amount correctly.  I didn’t know if I wanted to cry or shout as I stared at the amount of $10,000. I felt like running through the school but falling to my knees simultaneously in awe of what the Lord had done.

I walked into the hallway, the exact place where Kathy and I had talked about “opening wide our mouths” and had been specific in asking the Lord to provide for the needs of His school.  I saw Kathy across the hall and motioned for her to come and see what the Lord had done.  She immediately threw her hands up in praise and we began to share with the staff what the Lord had sent for His school.  Within minutes we were in the hallway praising God together as EVERY staff member and student all shouted “Thank You Jesus!” at the same time!  We told the kids what God had done and they celebrated with us.  It was an incredible moment as we praised God for His Faithfulness and His provision.  We never asked anyone for any of it, and God sent what we needed, when we needed it.

There is more to this amazing story about God’s faithfulness and how He is the Living God and the One who still provides for His people.  Our friends that sent us this overwhelming gift asked to remain anonymous as this is a seed that they have sown for “the future generation” as stated on their check.  In March of this year, these precious friends first told me about George Muller and about how God had poured out His faithfulness in such incredible ways as he established orphanages in the 1800s.  We had only been having a few thoughts that maybe the Lord was asking us to open a Christian school when we began to read about Mr. Muller and how the Lord used him.  As we read, our faith was strengthened and the Lord began to show us more and more about His plan for a Christian school where He establishes it His way and He provides for it without having to ask anyone for anything.

Our friends began to pray with us as we were asking God for His school in His way.  When I spoke to my friend on the phone today, I told her how overwhelmed we were by their gift.  I told her the story of how we had specifically asked God for His provision after reading about George Muller, and she told me something that amazed me even more.  She talked with me about how God had spoken to her and her husband this summer and told them that the amount that they were to give to His school was $10,000.  They did not have the money and did not know how the Lord would provide it, but they KNEW that He would.  She told me today that they knew that whenever the provision came, that it would be for them to sow into the school.  The provision came and they released it obediently as the Lord instructed.  Their gift came in God’s perfect timing as an answer to a prayer that was spoken in faith, believing that He would provide in His way and in His time.  What an incredible reminder of the faithfulness of God.  I cannot wait to see how God pours out His increase and His blessings on their family for their unwavering obedience to do what He asked them to do.

How Great is our Mighty GOD!  He is too wonderful for us to describe and worthy of more praise than we could ever give to Him.  We are thankful for all that God has already provided for His school and we are more certain now than ever that He will meet every need that we have in His way and in His timing.  Today He increased our faith at ACA. It is our prayer that by hearing what God has done over the past few days, and so far here at His school, that your faith will be strengthened and you will know Him as the One who hears, the One who is Faithful, and the One who provides.

“I think it’s cool that God provides everything we need.”  Joseph age 9 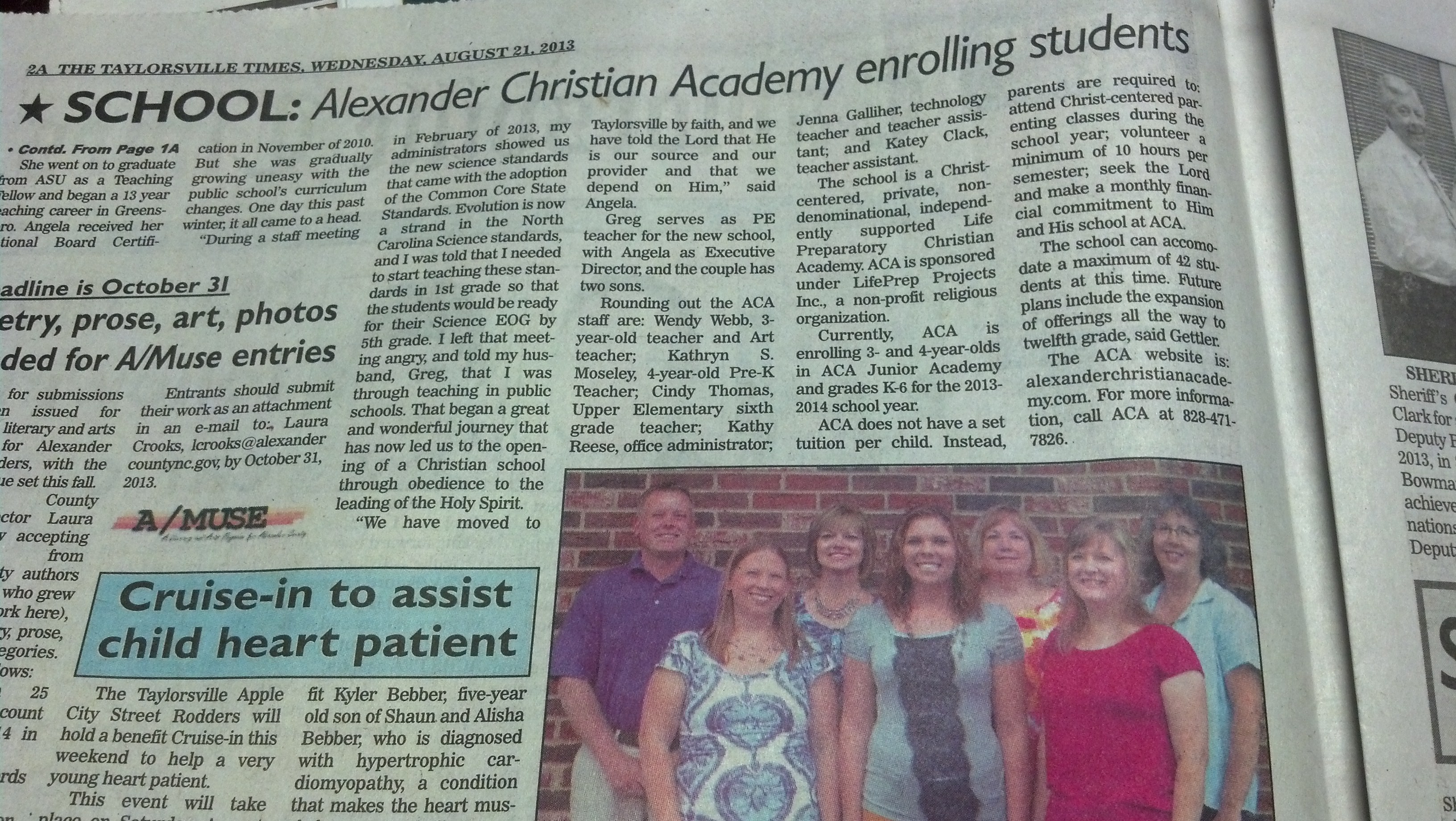 How GREAT is our God 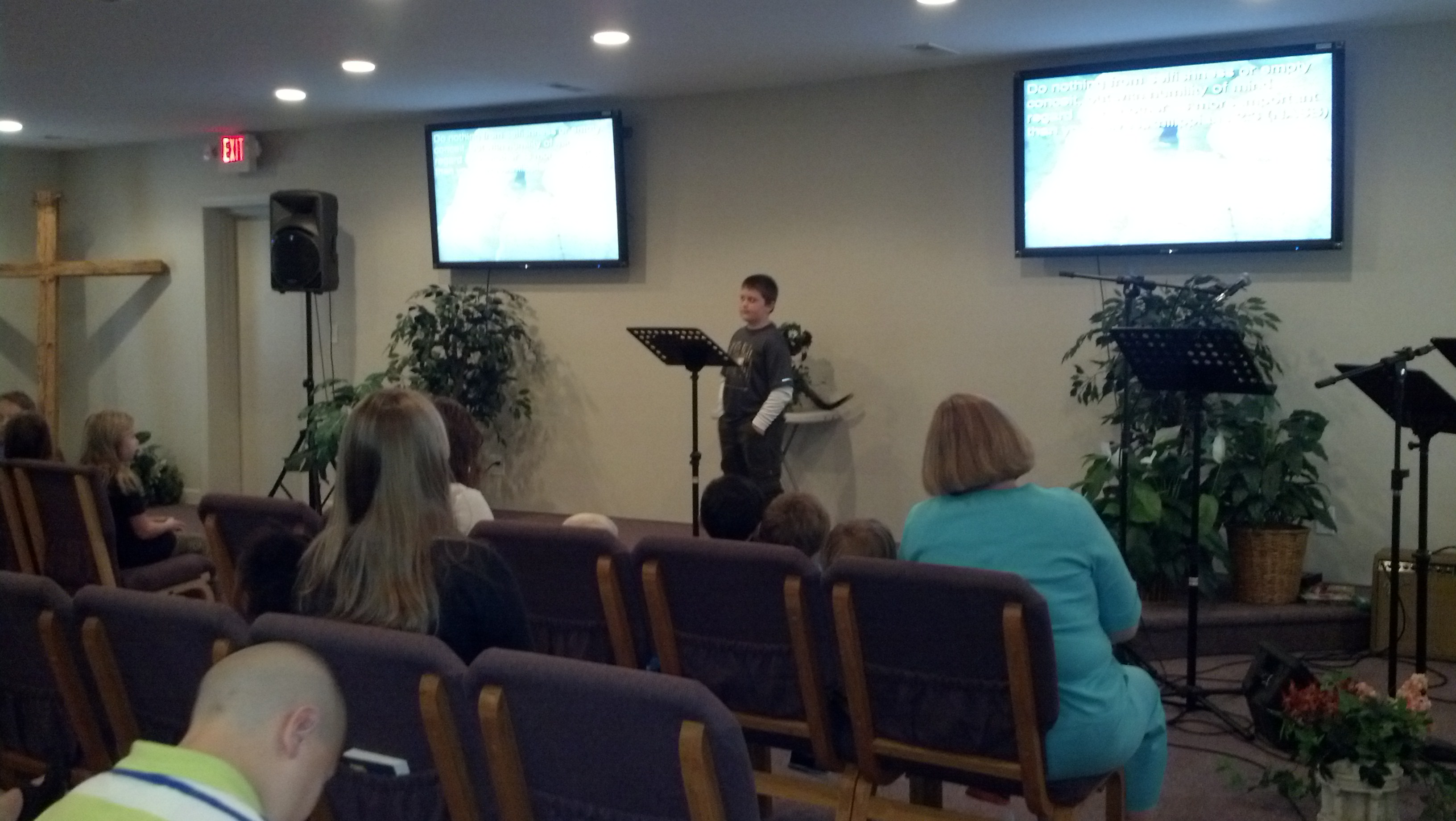 Equipping the next generation….. one school day at a time 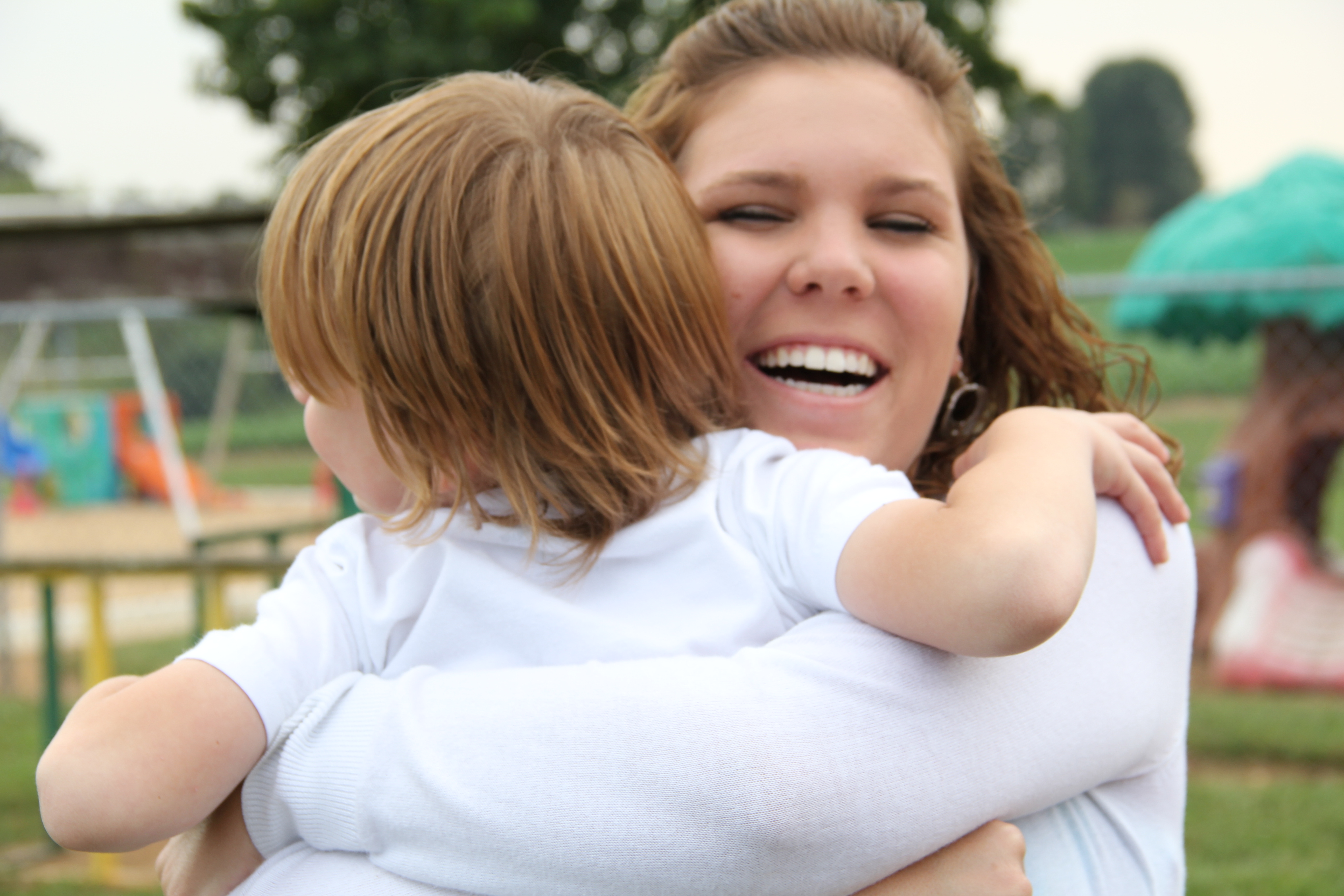 The godly LOVE to give……. Look at how God is working at ACA!